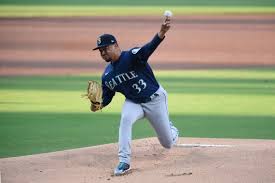 Beer Goggles are a thing in dynasty fantasy baseball. We have all worn them at some point right? Some people just get a little carried away when trying to acquire a 1st round pick and lose their freaking mind. At the bar you may have a wing man who hasn’t had as much to drink who can warn you that the girl across the way isn’t quite the trophy  you think she is. I’m certain assman Fito has wanted to make some trades in the past where wingman Rawlings has had to pump the brakes and let sanity prevail. Truth be told I wish I had a wingman when I decided to send Jameson Taillon packing for a couple picks to save salary when he was facing TJ surgery. If anyone thinks they have the goggles on, and wants a reality check, I would be available to take a quick glance for you. Don’t  wake up next to Kathy Bates.

I guess you know where I am going with this. I love this trade for Pine Mountain Podstars. Why? Mike Yastrzemski came out of nowhere the last couple years. At 29 this past year he put up an OPS of .968. Should have a couple peak seasons ahead of him. I probably wouldn’t have given up my first round pick for him, but would have thought long and hard about it. I tend to keep mine just because I enjoy making picks, that is my favorite part of fantasy baseball, so I understand the desire to acquire them. And I believe that is why you generally always have to overpay, because people like drafting “their” guys.  Mike Y  is by far the best player in the deal, but not the sole reason why I love this deal for Podstars. He also acquired 3 quality arms that are all mlb ready at a huge discount. Justus Sheffield as recent as 2019 was the mariners #1 prospect, scouting reports are good and he is ready to contribute. Alex Reyes has been toying with people for 5 years, major hype,  major injuries. Eventually these guys tend to click…look at Urias in LA recently for a recent example. Touki Tousaant, another highly touted prospect who has lost his shine and may be headed to the bullpen, but you never know and they are good to stash and just see what happens.

Jorge Mateo had a decent 2019 in AAA, so maybe Coach really likes him. Maybe he is the next Mike Y to figure it out in his late 20’s.

It’s not absolutely horrible. Reyes and Toussant are guys that probably dont have a ton of trade value as they are total wildcards at this stage, but nice wildcards to have. Like I said its fairly hard to get anybody’s first round pick a few months before the draft without overpaying. And I do like this draft. But take a look at any draft and its littered with misses. Chances of getting a bonafide major leaguer at pick 8 are what 50%? getting an allstar 25%? I’d guess those numbers are too high. So when you can can trade a 1st round pick for an allstar caliber player and 3 former 1st round type talents near mlb ready, you probably should.  The statistics here would favor Pine Mountain. Coach better make these picks count.

The other way to spin this…… Chaos traded away 2 bullpen arms, a mediocre SP prospect and a late blooming journeyman at his peak value to acquire two high picks which he will have cost controlled for years. That could be more accurate and that would likely be Chaos’s mindset. I’m just giving you a Hot take cause I know Coach Steve can handle it.