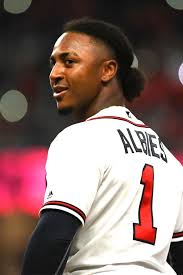 Hey look its a trade that i have no strong feelings over. Must mean its fairly even.

If I am choosing here I would personally rather have Albies as i feel like 2B is thin and he is a potential top 5 player at the position. Still only 23 years old he should just be starting his prime. You should be set at 2B for the next 5-7 years. In 2019 he had the 2nd most fantasy points among 2B in our league. 2020 he didn’t have as many at bats as others, but on a points/game basis was down around 12th among 2B. Its nice that both teams agreed he has a little more value than Alcantara and a prospect went along the other way

Alcantara only made 7 starts in 2020 and averaged just more then Carlos Carrasco and Tyler Glasnow in points/start. In 2019 he made 32 starts at 28ppg, which is a lot more average than you would want in giving up Albies. If he continues to take a step forward he could enter the upper echelon of pitchers. His FIP went down in 2020 from 4.55 to 3.71. Still only 25 there is reason for optimism here.  But personally i think the risk is higher that Alcantara ends up being average than Albies.

Levi Kelly was ranked 9th best prospect in AZ system has some nice numbers from the Midwest league his slider looks like a plus pitch, like a lot of young pitchers he seems to need to refine a 3rd pitch to take the next step. A nice second piece and something you don’t lose sleep on sending the other way to make the trade happen.

Overall Bomb Squad has a roster that looks to be taking shape, just needs a few more Innings somewhere having dealt Alcantara to shore up his infield.
Pine Mountain is putting some trust in Profar potentially with this deal, he adds another starter to an already solid rotation, and his lineup is looking solid. Will he roll with Profar or keep making moves?