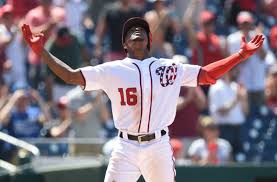 Take a look back at 2017 MLB top 100 prospects list. #3 on the list is our main man Victor Robles, he is followed by Vladdy, Eloy and Acuna. He was “the man” and then along came Juan Soto out of nowhere to be the man child who took Washington by storm. Soto, Vlad, Eloy and Acuna have left Robles in the dust and its easy to forget how highly touted he was.

Do we really know anything about Lodolo?  I know he was a first round pick that was supposedly polished and advanced , but we only have a meaningless micro sample in pro ball to go on. He was the first pitcher drafted in 2019 , so you would have to assume good things.  I sure didn’t know much about Yajure.  He was an international sign for a small bonus of 30,000 but has pitched quite well and made his debut out of the bullpen. Going forward if he continues to be a relief pitcher than there isn’t much to see here, but most of what I read says he has a floor of a 5th starter.

Definitely selling somewhat low on Robles here, but anyone who buys stocks knows its better to sell low than hold and watch all your value disappear. You have to know what you hold. If it was me I would have a hard time letting Robles go and would be holding and hoping he figures things out as I think the ceiling is still high, but in turning him into 2 near mlb ready pitchers there is potential this trade works out for either team or both. 2021 will tell us more.