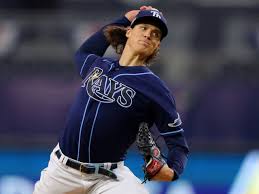 TBD can’t find a name, but he can find an ace. In the history of Dynasty Grinders he has successfully traded prospects for Jacob Degrom, Noah Syndergaard, Justin Verlander, I’m sure there are more. Lets go down memory lane one more time

Good on Suplex City for letting it be known that he was ready to move on from Glasnow. Its an easy thing to do and It only helps to get multiple offers. If only Luke Weaver hit the trade block, i would have backed up the truck :). He did get quite the bounty here, I just worry it may be more quantity than quality. Brennan Davis and Ethan Small i guess are the top pieces and both have yet to play above A ball. Brennan Davis is highly rated on a few lists. Luis Matos looks like he could be a high ceiling guy, he was mainly in the Domincan Summer league as a 17 year old in 2019. Jonathan Stiever rated Whitesox 6th best prospect is mlb ready. So there could be some good quality here, its just years away and the risk is high with each piece. Not my ideal return for a $7 potential ace.

Glasnow is not Verlander or even Syndergaard in my mind. But opinions may vary, he just doesn’t have a track record of consistency. While some might not like the Rays way of dealing with pitchers in our format I think its a positive. If they cap you at 5 or 6 innings you lessen the chance of that solid outing turning mediocre after a tired pitcher gives up a HR in the 7th or 8th.

Congrats to TBD on getting a cheap quality SP. He has a way of keeping his emotions in check and parting with prospects that others may have a tendency to fall in love with and overrate. There is an argument to be made for quantity over quality. Prospects have a way of surprising you so getting a handful of high ceiling youngsters isn’t a bad strategy, But generally when looking back on these trades the guy getting the proven star player isn’t too disappointed, unless you realize that Noah Syndergaard had TJ surgery shortly after being acquired by TBD in 2017. Us TBD competitors would hate to see something like that occur again.